Back to work again!

We’ve been back to work for a week now. Well, most of us anyway. Anton was stuck at the airport in Australia a little longer than he or we would have wanted him to. We’ve been preparing for the alpha testing that will happen the 15th January at Dragon’s Lair in Stockholm.
So if you are in Stockholm on the 15th make sure to sign up now for the testing here http://www.dragonslair.se/evenemang/?6907 it’s in Swedish, if you want to join the alpha testing without using the form, send an email to testing@nightnode.se).

If you can’t make it to the alpha testing but want to try the game early, you can sign up for the beta at orbitalgear.com. 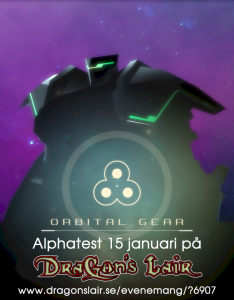